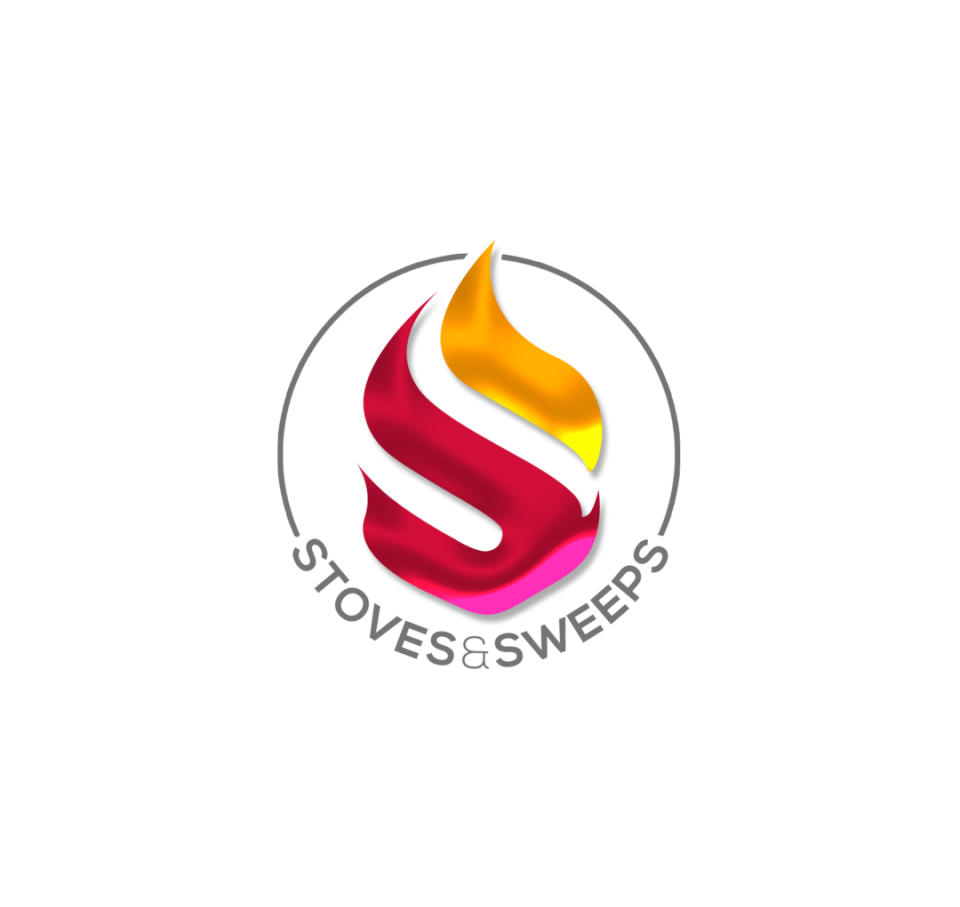 We supply and fit Bird/Rain guards and cappers for dis-used chimneys.

What not to use as a bird guard!

These two guards do indeed stop birds getting in the flue, but they also stop the chimney from being swept correctly.

The brush cannot go through the pot as the guard is pushed into it. This means we have to stop short with the brush so we don't knock it out. The soot and tar will build up over time making your fire smoke back.

What you should use and why

This type of bird guard straps to the outside of the pot, allowing the brush to pass through the pot and into the guard without pushing it off. You can then turn the brush in the guard to clean it.

We keep these in stock and in most cases can fit them with our own access equipment. Please call for a quote. 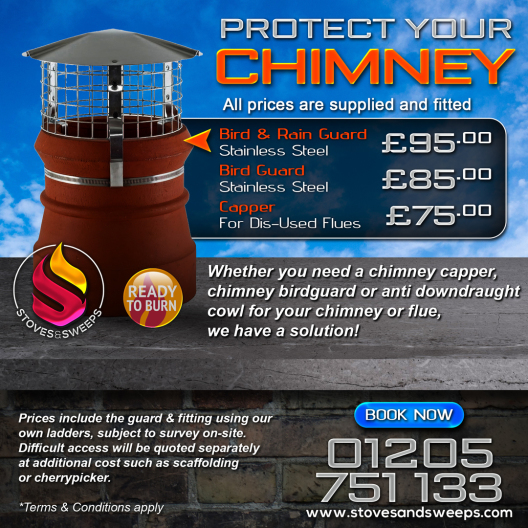 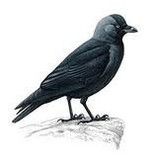 Nest removal is not the easiest thing to do. Chimney liners for stoves are
very fragile and can be penetrated by using incorrect equipment.

Consideration has to be given to the building as old masonry flues can be very fragile due to the lime mortar used in their construction. Removing the nest means using extra thick rods and various different attachments. Jackdaws nest a few feet down the flue so can’t be reached from the top. If there is a bend in the flue near the top they will build on this. They pack the top of the nest with mud, so you have to hit it with some force to break it up and it can be several feet thick. As we are working blind at the top of the flue it’s difficult to tell what you are ramming your rods into. Only trust an experienced sweep to carry out nest removal or you may get more removed than you bargain for.

Due to the large amount of stick and debris that they pack the nest with, it can be a messy job. We sheet the area and use an industrial vacuum, but as there is no draw on the flue because of the nest, it is difficult to control the dust. The best way is prevention by fitting a bird guard.

If you are unsure there is a nesting Jackdaw, then the best
advice is to wait until the end of August - September when they have gone.

The breeding season for Jackdaw's is April - July.

They only have one brood so if they lay early in April
incubation takes 20 days. The nestlings then fledge at 32 - 33 days, so the first weeks of June would be when you would see the Juveniles.

If they were late breeders in July then the nestlings would fledge late August early September.

They are numerous tell-tale signs to confirm nesting birds in chimneys. Debris falling down the chimney into your fireplace, sightings of adult birds bringing food and removing faecal sacs. Noise from the chicks, enter your loft and listen for calls, if there is a nest you will hear them.

We only remove nests once the birds have left. 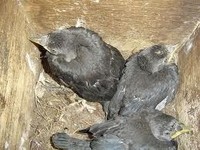 This is one I removed near sleaford in 2012. It was from a stove I installed the year before with a flexible chimney liner.

The customers had lit the stove without realising the bees were in there and killed most of them. You can see the Flexible rods im using in the picture so we dont damage the flue liner. The picture is looking into the rear outlet on the back of the stove.